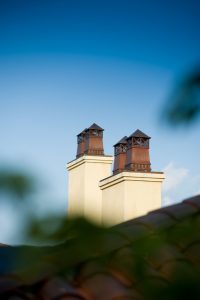 Every year lightning strikes cause around 22,600 fires and $451 million in property damage according to the National Fire Protection Agency. Most of these strikes happen in the summer during thunderstorm season, but of course lightning can occur any time of year. In the U.S., there are approximately 100,000 thunderstorms a year. Of those, around 10% are severe according to the National Weather Service (NWS).
Here at European Copper, we often get questions about the effect of lightning on our copper chimney pots. Since chimney pots are the highest point on many homes, you might think they are most likely to be struck by lightning. That’s not the case with a European Copper Chimney Pot!
Thankfully, our pots are not grounded and lack the vertical density to attract lightning like a lightning rod. Lightning travels at 270,000 MPH.  Each bolt is an average of 6 miles long, one inch wide, and is 50,000 degrees Fahrenheit or 5 times hotter than the sun. At that speed and force it will follow the path of least resistance and height, vertical density and isolation are the dominant factors controlling where lightning will strike.
A properly grounded lightning rod will move a bolt 50 feet, our European Copper Chimney Caps will only move a lightning bolt 5 feet. If our pots were made of wood, like a tree, it would have the same effect. Even if our pots are higher on a structure than a lightning rod, the bolt will connect to the lightning rod for the reasons previously stated.
Don’t leave your home’s chimney safety up to chance! Cap your chimney with a European Copper Chimney Pot for safety and style!

Fireplace Safety for Winter No doubt most of us will be spending more time than ever at home during the…
in Uncategorized Posted by Katlyn Stewart
October 16, 2020October 16, 2020

Keep your Family Safe this Winter!

Keep Your Family Safe this Winter Celebrity chef Rachael Ray recently had a fire that destroyed her New York home.…
in Uncategorized Posted by Katlyn Stewart